Exchange 2010 List ActiveSync Devices removed from Quarantine and other States

This works well for companies that only issue certain devices (i.e. blackberries) and want to block all android/iPhones from using Active sync. However, there are always exceptions. Especially when the CEO wants to use his iPhone. So the Admin can explicitly allow the CEO’s iPhone to connect. However, the GUI interface does not report on what devices are allowed, which met policy, which are given individual exemptions.

Here’s how I discovered how to get that info using Exchange PowerShell:

This command will list all active ActiveSync devices that have been issued an individual examption.

The DeviceAccessStateReason can also include:

The reason for the device’s access state. Available values include:

The same Cmdlet can be used to filter on any of the attributes of the Active Sync Item:

For a Summary of the Active Sync Devices, try the following command:

To view a count of devices of each device model, run the following command:

All these values are stored in AD and could also be queried via an LDAP search or a well-formed dsquery|dsget command. 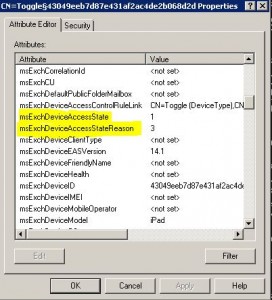