This is another article in my continuing adventure in running Linux on my new Sager Laptop.

To recap, I bought a Sager brand laptop because it had the same specs as a System76 Unit but at about 60% the cost.   I figured if System76 can get a working desktop then the hardware should be pretty compatible.   Well, as I discovered, its an uphill battle.

One thing that was lacking was the Fn+F1 key to disable the trackpad.    Something that I kinda need since this unit comes with a nice, big trackpad.    And that trackpad can get in the way when I position my hands for typing long documents.

Out of the box, Fn+F1 is not recognized by the unit.   So here’s my workaround.

I started with a Terminal window to find the character input for fn+F1.    From a terminal use Ctrl+v then press the key combo and the get the input code.

To test that, I used the following:

Pressing Ctrl+F1 gets me ‘foobar’ echoed to the display. So I know I have the right key code.

Next, I lefted a script that I found that toggles the touchpad via the command line. I saved this on my system:

I saved that to /opt/scripts/touchpadtoggle.sh and made it executable with ‘chmod +x’.

I tested the toggle script with:

Note that the ‘/n’ at the end sends a new line to execute the script.
Since the key combo does work and the touchpad toggles like I want, I can setup the key bind on each login by adding that bind line to ~/.inputrc

Or, you can add it to the Desktop by using Keyboard Shortcuts: 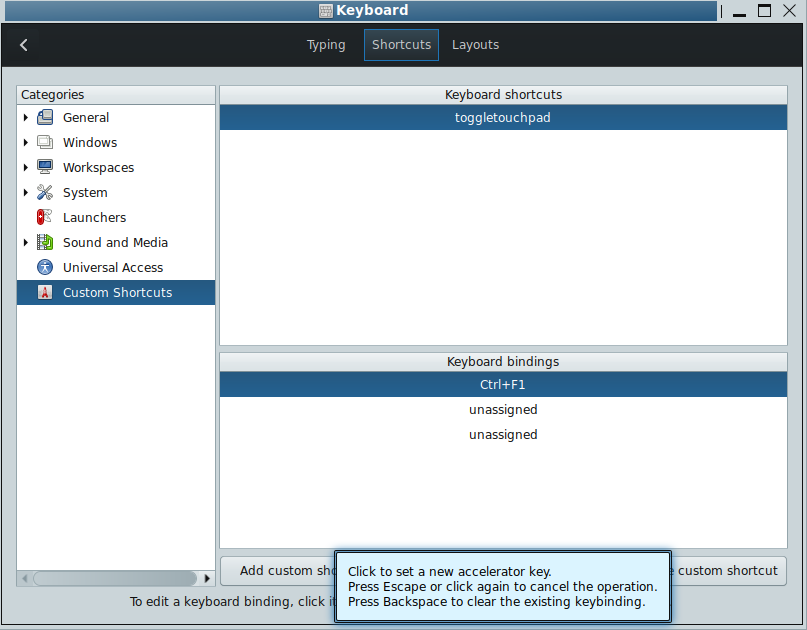 Reboot to test and now I have a usable touchpad toggle via key combo.